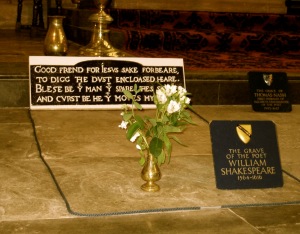 Shakespeare was obsessed with Time. He saw what the ravages of time did to those he knew and loved. His own son Hamnet died at the age of eleven. In Elizabethan times, death was all around: plague, pestilence, violence, war and the Elizabethan judicial system.   Perhaps in no other sonnet does the destructive power of Time enjoy such concrete imagery as in Sonnet 60:

Like as the waves make towards the pebbled shore,
So do our minutes hasten to their end;
Each changing place with that which goes before,
In sequent toil all forwards do contend.
Nativity, once in the main of light,
Crawls to maturity, wherewith being crown’d,
Crooked elipses ‘gainst his glory fight,
And Time that gave doth now his gift confound.
Time doth transfix the flourish set on youth
And delves the parallels in beauty’s brow,
Feeds on the rarities of nature’s truth,
And nothing stands but for his scythe to mow:
And yet to times in hope my verse shall stand,
Praising thy worth, despite his cruel hand.

There’s so much going on here. The imagery of time: waves on pebbled shore as minutes. The powerful language of struggle: toil, fight, confound, delves, scythe. The journey of human life set down: nativity to maturity. Time as gift-giver and the gift-taker. And finally, the triumph of Art, which is the only thing we have that can defeat time: ‘in hope my verse shall stand.’

Here’s the thing about this Sonnet: To read, study and understand this single ‘Young Man’ sonnet is to understand much of Shakespeare: so many of the chief themes worked out in his plays and poetry are all here: The universal struggle against time’s destruction, and the only way to defeat it–to create Art. In Shakespeare’s case, to write.

The image is of Will Shakespeare’s grave in Holy Trinity Church in Stratford-upon-Avon. I took this photo when I visited several years ago. Notice how Shakespeare is identified as “Poet.” The was his greatness, and how, in the end, he defeated time.