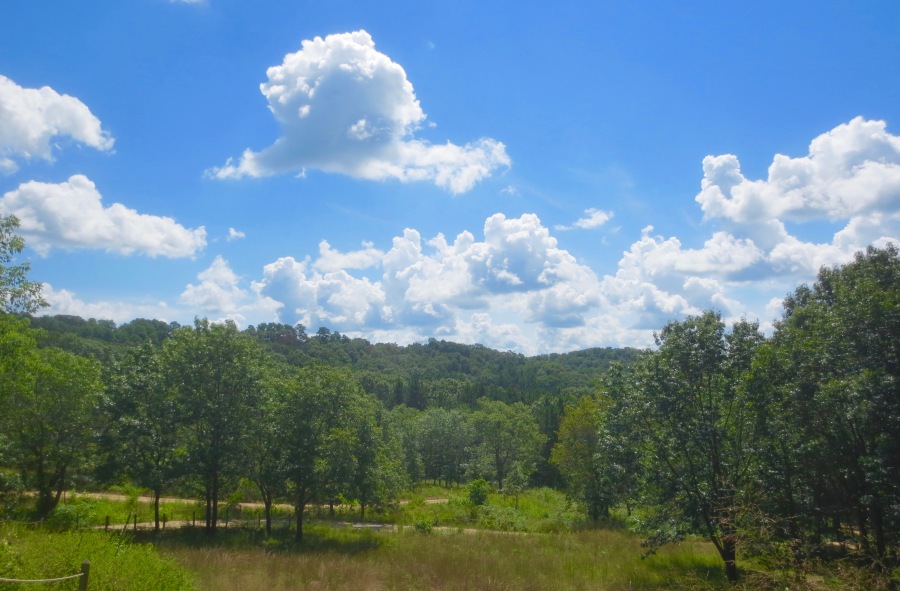 When William Shakespeare’s troupe of actors, The Lord Chamberlain’s Men, erected the Globe Theatre in 1599, did Will ever imagine his plays would still be performed four centuries later half a world away? Of course they are.  And here in Southern Wisconsin, we’re very lucky that one of the top professional Shakespearean acting companies in the world, American Players Theatre, calls Wisconsin its home.

This weekend I was lucky enough to tour all of the myriad backstage places and outbuildings of what amounts to a small city tucked away in the woods. American Players Theatre (APT), is a classical repertory theatre that performs Western stage classics. APT covers about 100 or so acres of forestland along the Wisconsin River, not far from Frank Lloyd Wright’s Taliesin. The APT campus houses two theatres–a gigantic outdoor venue that seats over a 1000, and a small intimate theatre for about 200. APT puts on about 8 shows per season, and typically 2 or 3 of those shows are Shakespearean.

Putting on high quality professional classical theatre is no mean feat. Putting on 8 shows over the course of a season is tantamount to planning an invasion. Here are a few glimpses behind the scenes.

Wisconsin River country on the edge of the Driftless region. This is a view of APT’s forestland from the summit of their ‘Up the Hill’ theatre. Three thespians founded this troupe back in 1980, when they discovered that the bowl of this hill created a natural acoustic amphitheater.

The ‘Up the Hill’ theatre. For 36 years this has been the heart and soul of APT. Most of the shows I’ve seen here through the years I’ve seen at night, under the stars. For matinees they spread out a parachute to shade the stage. Everything in the theatre–the seats, the sets, the lights–has to be rain-proof. But age has taken its toll, and after this season the whole Up the Hill theatre will be rebuilt, adding new rehearsal space, a better outdoor lobby, while preserving the natural aspects of this outdoor wonder.

The actors use more than the stage, they run up and down the amphitheater aisles. At night the actors must skirt along these hidden forest pathways to make entrances from behind the audience: Lit only by blue lights, it can be treacherous–especially if you’re wearing heels or carrying a sword.

One of the dressing rooms for the Up the Hill theatre. In the rebuild, these very old facilities will get replaced. But for now, this is what some world class actors use to get ready for their world class performances: I’m not exaggerating. APT has been written up in the New York Times, and its Artistic Directors travel to New York every year looking for talent.

Another reason the Up the Hill section need rebuilding. APT’s campus has several rehearsal spaces, but this rickety old barn with screens for walls really needs an update. It’s in there they were probably rehearsing scenes for this year’s King Lear. I imagine it wasn’t that much different than what Will Shakespeare had to use.

The view from backstage in the Up the Hill theatre. I can’t count the number of steps, switchbacks, turns, aisles and crooks I climbed over. These actors and the tech crews typically navigate all of this at night.

Once finished with our Up the Hill tour, we hiked through the woods to APT’s other venue, the indoor Touchstone Theatre. It sits in the middle of the woods overlooking a wide swatch of restored prairie. This theatre is only about five years old, unlike its granddaddy up on the hill.

The inside of the Touchstone has allowed APT to really expand it repertoire. They can put on much smaller plays, and it also allows APT to stretch their season into November–after the Up the Hill has been iced over.

The Touchstone lobby. Though this is indoor, APT wanted to dovetail this theatre with its environment: wide windows letting in the light and gorgeous views of the forestland.

The backside of the Touchstone shows just how world class it is: all of the environmental mechanicals reside outside of the building, allowing the company to maintain complete silence in the performance space, controlling every aspect of the environment in order to bring theatrical illusions to life.

The scene shop. APT has two support buildings called Alpha and Bravo, and these house state-of-the-art rehearsal spaces, scene shops, paint shops, prop shops, costume shops, millenaries, laundries, offices and storage. Going through all of these spaces made me realize even more that the old Up the Hill theatre is really overdue for an upgrade.

The costume shop. There are a million universes in this place.

All of these skilled professionals work like hell to put on these shows, but they also have a sense of humor. Here’s mock up of an actual actor from Julius Caesar hanging from the wall of the prop shop, from a production of just a few years ago.

The costume storage seems infinite. APT builds from scratch about a third of the costumes they need for a season. They lift from the prodigious collection for another third, and have to rent or buy the last third. They are also in the business of renting costumes to other theatres in the Midwest.

Here is the grand old oak that inspired APT’s logo. She’s getting sick now, and not long for this world. But if you look to the right of this giant oak, you’ll see her successor has been growing for a few years now.   A great analogy for the company and its future.