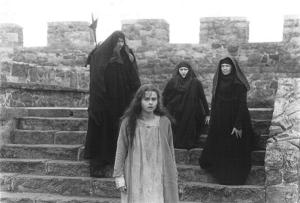 Innocent, virtuous, obedient and lovely Ophelia, swept over by the tragic events of life and the machinations of the corrupt Danish court. Her mother is not present–possibly having died giving birth to Ophelia. And soon Ophelia’s father, Polonius, will die by Hamlet’s sword. And Hamlet? It seems he once expressed love for sweet Ophelia. But now that has passed, and Ophelia laments the madness that has taken Prince Hamlet:

O, what a noble mind is here o’erthrown!

The expectancy and rose of the fair state,

The glass of fashion and the mould of form,

The observed of all observers, quite, quite down!

And I, of ladies most deject and wretched,

That suck’d the honey of his music vows,

Now see that noble and most sovereign reason,

Like sweet bells jangled, out of tune and harsh;

That unmatch’d form and feature of blown youth

Blasted with ecstasy: O, woe is me,

To have seen what I have seen, see what I see!

A beautiful soliloquy, where she bemoans Hamlet’s passing greatness, and pities herself, a lady ‘most deject and wretched.’ Bemoans the love he once expressed to her: ‘that suck’d the honey of his music vows.’

The character of Ophelia has spurred debate for centuries, and for this brief blog post, any opinion I offer I do so at my peril. Suffice it to say that for this me, a man, Ophelia has always proven tantalizing, mysterious, and somehow incomplete. Certainly Shakespeare intended that, in this play, his most developed and rewritten masterpiece. Yes, I think Shakespeare intended that. For Ophelia stands as strong counterpoint to the only other female role in the play, Hamlet’s mother, Gertrude, who has married her husband’s murderer.

Was Prince Hamlet a misogynist? A strong argument can made for that. Was Shakespeare? Some argument has been made for that also, but I don’t think so. Shakespeare had no control over the fact that Elizabethan law did not allow women to act on stage. Shakespeare had to cast boys as his women. There’s compelling evidence–judging by the roles for women in his plays, and the order in which the plays were produced–that Shakespeare populated his plays with female roles depending on the talent at hand. For Hamlet, he had two extraordinary gifted boys. And in the 400 years since, many extraordinary women have played Ophelia and Gertrude.

The image is of Helena Bonham-Carter as Ophelia in the 1990 version of Hamlet.   In this scene it appears Ophelia has already lost her marbles.