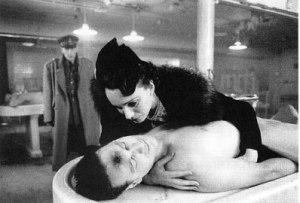 I’ve touched on this quote before, but it’s so powerful–one of my favorites–that I’d like to quote in its entirety Lady Anne’s speech in its wrathful glory:

Foul devil, for God’s sake, hence, and trouble us not;

For thou hast made the happy earth thy hell,

Fill’d it with cursing cries and deep exclaims.

If thou delight to view thy heinous deeds,

Behold this pattern of thy butcheries.

She points to the corpse

For ’tis thy presence that exhales this blood

From cold and empty veins, where no blood dwells;

Thy deed, inhuman and unnatural,

Provokes this deluge most unnatural.

O God, which this blood madest, revenge his death!

O earth, which this blood drink’st revenge his death!

Either heaven with lightning strike the murderer dead,

Or earth, gape open wide and eat him quick,

As thou dost swallow up this good king’s blood

Which his hell-govern’d arm hath butchered!

This delicious string of curses and insults that Lady Anne hurls at Richard, over the corpse of her dead uncle, King Henry, are a wonder of theatre and characterization. Richard announces right from the opening of the play his evil intentions. The audience has no doubt he’s the villain–the play has no hero. As if there weren’t enough, in Scene ii, the widowed Lady Anne (her husband Prince Edward and her uncle the King are dead) sets out for the audience in her speech Richard’s true character.

Yet–and this has troubled critics for centuries–in the ensuing scene Richard’s loquacious genius persuades Anne to marry him! Such a shocking turnabout has always been a challenge for actresses playing Anne. It’s certainly possible: the greatest performers are able to evoke Anne’s horror, anger, shock, naivety and scrappy survival instincts all at once.

The image is of Kristin Scott Thomas as Lady Anne in the magnificent film adaptation of Richard III from 1995. Ian McKellen looms in the background as Richard. The man with the hole in his head is King Henry.