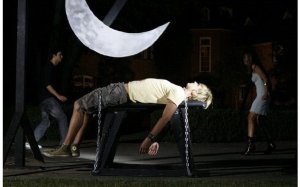 For Good Friday, an anniversary of a particularly gruesome execution, here’s a quote about another particularly inventive form of execution, this one from Poe’s imagination:

It might have been half an hour, perhaps even an hour, (for I could take but imperfect note of time) before I again cast my eyes upward. What I then saw confounded and amazed me. The sweep of the pendulum had increased in extent by nearly a yard. As a natural consequence, its velocity was also much greater. But what mainly disturbed me was the idea that had perceptibly descended. I now observed—with what horror it is needless to say—that its nether extremity was formed of a crescent of glittering steel, about a foot in length from horn to horn; the horns upward, and the under edge evidently as keen as that of a razor. Like a razor also, it seemed massy and heavy, tapering from the edge into a solid and broad structure above. It was appended to a weighty rod of brass, and the whole hissed as it swung through the air.

What boots it to tell of the long, long hours of horror more than mortal, during which I counted the rushing vibrations of the steel! Inch by inch—line by line—with a descent only appreciable at intervals that seemed ages—down and
still down it came! Days passed—it might have been that many days passed—ere it swept so closely over me as to fan me with its acrid breath. The odor of the sharp steel forced itself into my nostrils. I prayed—I wearied heaven with my prayer for its more speedy descent. I grew frantically mad, and struggled to force myself upward against the sweep of the fearful scimitar. And then I fell suddenly calm, and lay smiling at the glittering death, as a child at some rare bauble.

These two paragraphs (not exactly contiguous in the story) form one of the most infamous images from Poe’s oeuvre, the kind of diabolical form of execution worthy of the ancient Romans, where executions were engineered to extract the maximum amount of pain and horror from the condemned before his death.

Of course, in Poe’s story, the target of this design is the reader’s horror. Could Poe have known in the 1840’s that his story would still be read today, would spawn two films (though he couldn’t know what ‘films’ were) and enter our English vernacular? I doubt it: Poe was just desperately trying to make a living.