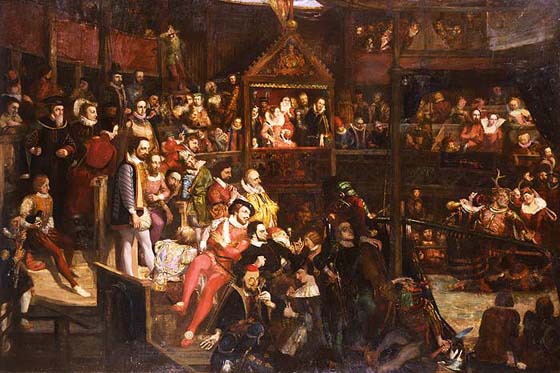 As we approach the shortest and darkest day of the year on the 21st, the Solstice, here’s a little ditty from the Bard. His oft quoted ‘Winter’ song ends the play Love’s Labour’s Lost.

WHEN icicles hang by the wall,

And Dick the shepherd blows his nail,

And Tom bears logs into the hall,

When blood is nipped, and ways be foul,

Then nightly sings the staring owl,

When all aloud the wind doth blow,

And coughing drowns the parson’s saw,

And birds sit brooding in the snow,

When roasted crabs hiss in the bowl,

Then nightly sings the staring owl,

Not everything Shakespeare wrote needs to be profound on seven different levels, requiring a PhD in British Literature to decipher. This simple song (and yes, it’s been put to music by several composers) is pretty straightforward, singing about the discomforts of winter, and the singular joy of fellowship with family and friends, the comfort of good food indoors, out of the wind and snow.

Performances of Shakespeare’s plays in his lifetime–especially those through his early career of mostly comedies and histories–often ended with seeming impromptu songs or ditties. Not so impromptu; they were practiced and repeated. Alas, many of these are lost, never having been included with the texts in the First Folio.

Oftentimes the chief clown and dancer of the Lord Chamberlain’s Men’s, Will Kempe, led these songs. After about 1599 or so, much of these show-ending numbers ended. Kempe had a falling out with The Lord Chamberlain’s Men, and Shakespeare began his run of great tragedies. Perhaps it just didn’t seem right to dance a jig after the stage was overrun with blood.   Anyhow, today we have a small literary tragedy: that we don’t have a lot of these songs, or the music they were originally performed with. The curious ending of the Love’s Labour’s Lost, though, included two of these. I’ll save the other for a different season.

The image is of a painting by David Scott, circa 1840. It shows Queen Elizabeth I at the Globe Theatre–a bit of fantasy. The Queen never attended public performances.