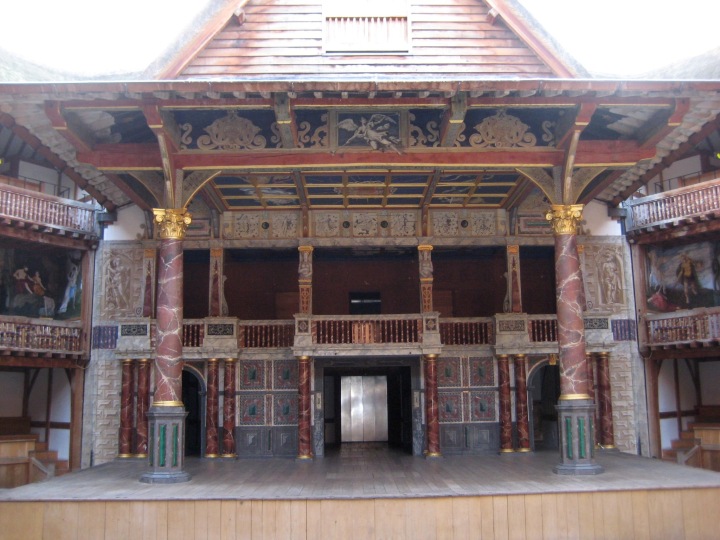 As an unperfect actor on the stage
Who with his fear is put besides his part,
Or some fierce thing replete with too much rage,
Whose strength’s abundance weakens his own heart.
So I, for fear of trust, forget to say
The perfect ceremony of love’s rite,
And in mine own love’s strength seem to decay,
O’ercharged with burden of mine own love’s might.
O, let my books be then the eloquence
And dumb presagers of my speaking breast,
Who plead for love and look for recompense
More than that tongue that more hath more express’d.
O, learn to read what silent love hath writ:
To hear with eyes belongs to love’s fine wit.

The Poet tells his young love (the Young Man) that like an unpracticed actor on the stage who doesn’t yet know his lines, he doesn’t know what to say:

As an unperfect actor on the stage

So I, for fear of trust, forget to say

The perfect ceremony of love’s rite.

Shakespeare also throws in a comparison to an animal that’s so fierce it can’t articulate its own heart. But by the end of the sonnet, the Poet gets back to the point. Instead of taking me for what I say (like the unpracticed actor), take me for what I write:

O, let my books be then the eloquence

I find this Sonnet really interesting from our modern perspective. Because now all we can really know about Shakespeare are what he’s left us in his writing. It’s almost as if the Poet is talking both to the Young Man, and to future generations: What really matters is what’s written down. Related to this, we don’t really know how Elizabethan actors sounded on stage. Yes, there have been some recent breakthroughs on Elizabethan pronunciation, clued by some of Shakespeare’s own puns. The Globe Theatre in London now offers some performances in what they believe is close to the original dialect. But in the end, it’s a bit of guesswork. Not with what’s written.

So ultimately, the lesson the Poet gives the Young Man is this: anything not so eloquent I might say is evanescent; but what I’ve written down in the words of this sonnet–and in any of my books–are what’s true and everlasting.

The image is of the actual stage of the reconstructed Globe Theatre, which I was lucky enough to visit in 2010. We believe this is very much what it looked like when Shakespeare stood upon it.