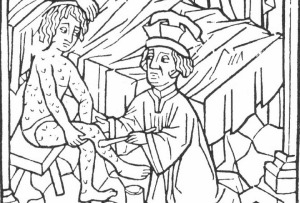 Shakespeare ends the most magnificent collection of sonnets ever written in the English language with a warning about venereal disease. How romantic.

The little Love-god lying once asleep
Laid by his side his heart-inflaming brand,
Whilst many nymphs that vow’d chaste life to keep
Came tripping by; but in her maiden hand
The fairest votary took up that fire
Which many legions of true hearts had warm’d;
And so the general of hot desire
Was sleeping by a virgin hand disarm’d.
This brand she quenched in a cool well by,
Which from Love’s fire took heat perpetual,
Growing a bath and healthful remedy
For men diseased; but I, my mistress’ thrall,
Came there for cure, and this by that I prove,
Love’s fire heats water, water cools not love.

Cupid’s love torch (phallic symbol) burns just a bit too hot. Diana’s nymphs (she was the virgin goddess of the hunt) try to cool its heat in a nearby spring (fertility symbol). It heats up the pool so much, that now those waters can cure diseased men! The is for men diseased with the maladies of love, namely syphilis. And so the Poet, having caught that venereal disease from his mistress, goes into the hot waters to be cured. What does the Poet learn? The cure hasn’t cured his ardor for the woman who put him there.

This closing sonnet is a companion piece to the previous sonnet, #153, which also talks about syphilis and the Elizabethan cure for the disease–a rather dangerous and painful process involving inhaling mercury vapors in searing baths.

There has been a lot of scholarly argument regarding these two Cupid/hot bath/VD sonnets, and their connections to the two previous narratives–the Young Man Sonnets, and the Dark Lady Sonnets. I think they’re connected to both, and serve as an ironical denouement to this love triangle. Pervious verses show that the Young Man and the Dark Lady do intersect, and they both betray the Poet. So how better to end this winding narrative–so elusive, so full of unanswered questions, so contrary to the accepted poetic notions of Romantic Love–than to have the Poet come down with VD?

Rumors abound in scholarly circles that Shakespeare himself might have had syphilis. It’s impossible to ever know. Regardless, he certainly knew of it.

The image is from an anonymous woodcut, circa 1500, of a physician treating syphilis.