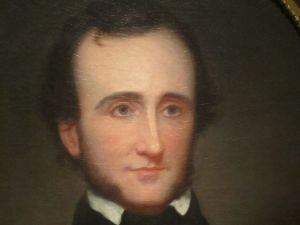 This dreary but beautiful little verse, ‘Alone’, could almost be Poe’s autobiography.

From childhood’s hour I have not been

As others were—I have not seen

As others saw—I could not bring

My passions from a common spring—

From the same source I have not taken

My sorrow—I could not awaken

My heart to joy at the same tone—

And all I lov’d—I lov’d alone—

Then—in my childhood—in the dawn

Of a most stormy life—was drawn

From ev’ry depth of good and ill

The mystery which binds me still—

From the torrent, or the fountain—

From the red cliff of the mountain—

From the sun that ’round me roll’d

In its autumn tint of gold—

From the lightning in the sky

As it pass’d me flying by—

From the thunder, and the storm—

And the cloud that took the form

(When the rest of Heaven was blue)

Of a demon in my view—

Alas, ‘Alone’ can’t be autobiographical of his later years, for Poe wrote this around 1829, when he was only twenty years old, two decades before his death. So maybe it was prophesy. It seems, though, to speak to Poe’s lifelong inner torment and feeling of isolation. Demons would haunt him throughout his life: poverty, tuberculosis, alcoholism, mental illness.

This little gem lay hidden until long after Poe’s death, when E. L. Didier ‘found it’, gave it its title and published it in 1875. For a time there was doubt as to this poem’s authorship. Scholars have resolved those question. What remains, however, is the mystery behind Poe’s uncanny self-awareness as expressed in this youthful rumination.

The image is a painting of Poe by Samuel Stillman Osgood, circa 1845. This idealized representation perhaps gives a hint of what Poe might’ve looked like in his youth, before he began to pose for all those wonderful daguerreotypes of the now iconic insane Romantic genius.