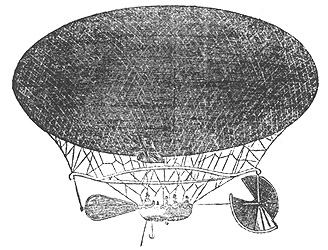 Poe was a renowned liar, bluffer and tale-teller, and loved mysteries, conundrums, contraptions and ciphers. On more than one occasion his stories shocked readers not just because their content broke nineteenth century social or literary taboos, but because the audience mistook his fiction for fact. Sometimes this was intentional on the author’s part. Take what Poe published in The New York Sun in 1844 under a headline that read ASTOUNDING NEWS! By Express Via Norfolk.

‘The Balloon Hoax’ recounts what appears to be an actual crossing of the Atlantic Ocean. From our modern perspective, note that no one would manage to make an real balloon crossing until the twentieth century, over sixty years later. But Poe, like all good liars, weaved a bit of truth into his grand joke, cribbing the names of an actual European balloonists into his narrative, creating a false ‘journal’ and stuffing the yarn with plenty of technical jargon and mechanical descriptions. Even a fake illustration.

The actual article, or story, is pretty dry and standard stuff for Poe, and from a modern reader’s perspective a bit too padded. It’s available almost everywhere to read if you want to. If you don’t, allow me to point you to the most delicious part–its closing lines. In this final paragraph, Poe seems to be slyly mocking his readers and the paper that agreed to publish it:

This is unquestionably the most stupendous, the most interesting, and the most important undertaking, ever accomplished or even attempted by man. What magnificent events may ensue, it would be useless now to think of determining.

The follow-up to this hoax is where the real fun lies (pun intended). Not long after this story ran, Poe published a recollection of the events on the morning of the hoax’s publication. Poe stood on the steps of The New York Sun, supposedly trying to tell people it was a joke. But he encountered pandemonium. If we’re to believe Poe (which we might not), there were riots as citizens fought to get copies of the amazing news of an Atlantic crossing by air. Poe’s own words:

On the morning (Saturday) of its announcement, the whole square surrounding the ‘Sun’ building was literally besieged, blocked up—ingress and egress being alike impossible, from a period soon after sunrise until about two o’clock P.M…. I never witnessed more intense excitement to get possession of a newspaper. As soon as the few first copies made their way into the streets, they were bought up, at almost any price, from the news-boys, who made a profitable speculation beyond doubt. I saw a half-dollar given, in one instance, for a single paper, and a shilling was a frequent price. I tried, in vain, during the whole day, to get possession of a copy.

Finally, Poe not only fooled the public, he fooled The New York Sun, who also thought the story was an actual report. Two days later they had to print a retraction.

The image is a hand-drawn copy of a balloon contraption Poe found; reputedly this drawing is in Poe’s own hand. The Raven had many talents.