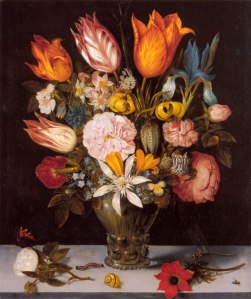 One of my all time favorite couplets caps Shakespeare’s Sonnet 94. It’s the epitome of a great couplet: iambic pentameter and rhymed, closing the argument of the sonnet, but doing so with a stunning reversal. At the same time, this couplet is beautiful to read, contains a great metaphor speaking a great truth, reads aloud easily and deliciously, so much so that it contains the power of an ageless aphorism.

They that have power to hurt and will do none,
That do not do the thing they most do show,
Who, moving others, are themselves as stone,
Unmoved, cold, and to temptation slow,
They rightly do inherit heaven’s graces
And husband nature’s riches from expense;
They are the lords and owners of their faces,
Others but stewards of their excellence.
The summer’s flower is to the summer sweet,
Though to itself it only live and die,
But if that flower with base infection meet,
The basest weed outbraves his dignity:
For sweetest things turn sourest by their deeds;
Lilies that fester smell far worse than weeds.

This sonnet is a condemnation of the Young Man, whom the Poet loves. But the poem seems to be speaking about two disparate things–until its stunning conclusion.

In the first 8 lines the Poet talks about how people who seem not do the stuff they most apparently are made to do: ‘That do not do the thing they most do show’. These people are so beautifully made that they can move the emotions (and lusts) of others, yet somehow manage to restrain themselves: ‘They are the lords and owners of their faces, Others but stewards of their excellence.’

Then, in the next four lines the subjects changes to summer flowers. Huh? The sweetest summer flower, if it succumbs to thickets of weeds, becomes worse than the weeds that infect it.   And there’s the connection. The final couplet warns the Young Man: regardless of how beautiful you are, your deeds will sour all of that:

For sweetest things turn sourest by their deeds;
Lilies that fester smell far worse than weeds.

As is typical with most of Shakespeare’s sonnets, there’s much more going on here–and a knowledge of how aristocratic patronage worked in Elizabethan England might reveal a little bit more about what the Poet’s talking about.   But for now, just enjoy the lovely brilliance of that last couplet.

The image comes from a painting of flowers by Ambrosius Bosschaert (the Elder), a Dutch painter who was a contemporary of Shakespeare’s.