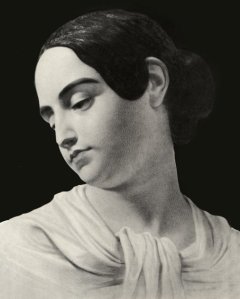 Poe’s poem ‘Ulalume’ is a posthumous publication. Written in 1847, Poe couldn’t find a publisher for it during the last two years of his life.   This dreary, tragic verse adds to Poe’s street cred as a hardcore melancholy Romantic. The poem is not necessarily very deep with meaning, and in my opinion is best enjoyed read aloud for its rhythm and the hypnotic effect of its repetition of words, lines and sounds. It’s a kind of cousin to ‘The Raven’: mourning for a dead love.

The fascinating curiosity about this verse is its dramatic irony: that is, the speaker for much of the poem doesn’t remember that his beloved Ulalume is dead. Only when he revisits her tomb in the last verse, does the devastation of her death return to him. So in a sense, this poem is a story.

Here once, through and alley Titanic,
Of cypress, I roamed with my Soul –
Of cypress, with Psyche, my Soul.
These were days when my heart was volcanic
As the scoriac rivers that roll –
As the lavas that restlessly roll
Their sulphurous currents down Yaanek
In the ultimate climes of the pole –
That groan as they roll down Mount Yaanek
In the realms of the boreal pole.

Our talk had been serious and sober,
But our thoughts they were palsied and sere –
Our memories were treacherous and sere, –
For we knew not the month was October,
And we marked not the night of the year
(Ah, night of all nights in the year!) –
We noted not the dim lake of Auber
(Though once we had journeyed down here) –
Remembered not the dank tarn of Auber,
Nor the ghoul-haunted woodland of Weir.

And now, as the night was senescent
And star-dials pointed to morn –
As the star-dials hinted of morn –
At the end of our path a liquescent
And nebulous lustre was born,
Out of which a miraculous crescent
Arose with a duplicate horn –
Astarte’s bediamonded crescent
Distinct with its duplicate horn.

And I said: “She is warmer than Dian;
She rolls through an ether of sighs –
She revels in a region of sighs:
She has seen that the tears are not dry on
These cheeks, where the worm never dies,
And has come past the stars of the Lion
To point us the path to the skies –
To the Lethean peace of the skies –
Come up, in despite of the Lion,
To shine on us with her bright eyes –
Come up through the lair of the Lion,
With love in her luminous eyes.”

I replied: “This is nothing but dreaming:
Let us on by this tremulous light!
Let us bathe in this crystalline light!
Its Sybilic splendour is beaming
With Hope and in Beauty tonight! –
See! -it flickers up the sky through the night!
Ah, we safely may trust to its gleaming,
And be sure it will lead us aright –
We safely may trust to a gleaming,
That cannot but guide us aright,
Since it flickers up to Heaven through the night.”

Thus I pacified Psyche and kissed her,
And tempted her out of her gloom –
And conquered her scruples and gloom;
And we passed to the end of the vista,
But were stopped by the door of a tomb –
By the door of a legended tomb;
And I said: “What is written, sweet sister,
On the door of this legended tomb?”
She replied: “Ulalume -Ulalume –
‘Tis the vault of thy lost Ulalume!”

Then my heart it grew ashen and sober
As the leaves that were crisped and sere –
As the leaves that were withering and sere;
And I cried: “It was surely October
On this very night of last year
That I journeyed -I journeyed down here! –
That I brought a dread burden down here –
On this night of all nights in the year,
Ah, what demon hath tempted me here?
Well I know, now, this dim lake of Auber –
This misty mid region of Weir –
Well I know, now, this dank tarn of Auber,
This ghoul-haunted woodland of Weir.”

Some scholars and historians have wondered if this poem is autobiographical. That seems reasonable to me. Poe lost his beloved Virginia to tuberculosis. He was obsessed with the concept of ‘the most poetical thing in the world is the death of a beautiful woman.’ And he spend the last couple years of his life–when this poem was written–frantically trying find a new wife. The loneliness he suffered agonized him.

The image is of Poe’s dead wife, Virginia Eliza Clemm Poe, painted after her death. She was Poe’s first cousin, and married him when only 13. She died at the age of 24 in 1847 (the year ‘Ulalume’ was written). Many scholars believe they never consummated their marriage, though Poe loved her profoundly, and was, by all accounts, devastated by her early death.