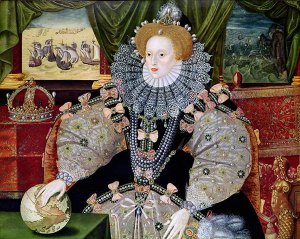 Shakespeare’s 154 Sonnets are famous and enduring for many reasons: their beauty; their poetic genius of lyricism and form; their originality and refusal to bend to conventions, whether Elizabethan or modern; the fact that some of them express love for a man, and other express love for an arguably unlovable woman. But what also makes these great are their varied metaphors. One of the most unlikely set are Sonnets 123 and 124, which use the world of politics and state to make their case. 124 is full of politics.

If my dear love were but the child of state,
It might for Fortune’s bastard be unfather’d’
As subject to Time’s love or to Time’s hate,
Weeds among weeds, or flowers with flowers gather’d.
No, it was builded far from accident;
It suffers not in smiling pomp, nor falls
Under the blow of thralled discontent,
Whereto the inviting time our fashion calls:
It fears not policy, that heretic,
Which works on leases of short-number’d hours,
But all alone stands hugely politic,
That it nor grows with heat nor drowns with showers.
To this I witness call the fools of time,
Which die for goodness, who have lived for crime.

Few of us today are experts in Elizabethan history and politics. Reading this poem simply for its argument–that love is greater than all human-created conventions or ideals–is evident enough. But scholars and historians have, for centuries, tried to parse out all of the specific political references. In the hands of a lesser poet, such references might cripple the work, forever rendering it anachronistic. But with Shakespeare, these references also work in a general sense. Some examples:

‘were but the child of state’: if you were something created only for profit or power (meaning, but you, dear love, are not)

‘for Fortune’s bastard be unfather’d’: the political world of Europe was littered with bastards of royal birth (meaning, but your love is true born)

‘it suffers not in smiling pomp’; the falseness of Courtly and political life (meaning, but your love shows true)

‘But all alone stands hugely politic’: politics dictate what’s important at the moment (meaning, but your love stands beyond the rage or worry of the moment)

This sonnet is full of many more examples.

So even today, any person woefully ignorant of Elizabethan goings-on can listen to or read Shakespeare’s great sonnets and come away with a sense of wonder, enlightenment and the sonnet’s central message: that love conquers time and anything man can build.

The image is of the prevailing head of state for most of Shakespeare’s life, Queen Elizabeth. The artist is uncertain, but what is certain is that this painting was commissioned by the state as political propaganda after Elizabeth’s defeat of the Armanda.