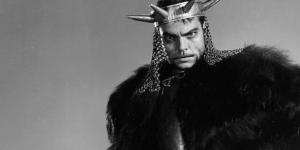 One of the remarkable things about Shakespeare was how sublimely eloquent he could make his villains. And some of his villains weren’t very lovable. Take Macbeth for instance: plotter, mass-murderer, arguably a coward, and certainly overshadowed by the powerful presence of his wife, Lady Macbeth. And yet, when his wife dies, he gives one the greatest soliloquys ever put to pen:

She should have died hereafter;
There would have been a time for such a word.
— To-morrow, and to-morrow, and to-morrow,
Creeps in this petty pace from day to day,
To the last syllable of recorded time;
And all our yesterdays have lighted fools
The way to dusty death. Out, out, brief candle!
Life’s but a walking shadow, a poor player
That struts and frets his hour upon the stage
And then is heard no more. It is a tale
Told by an idiot, full of sound and fury
Signifying nothing.

Macbeth has just found out Lady Macbeth is dead. And so comes this famous and astonishing speech, so eloquent, that many of its parts have been borrowed, copied and repeated to this very day.

The speech is a striking contemplation about the futility of life. Lady Macbeth? She would’ve died anyway. Such tragedies have marched on for ever. Our time on the stage and our struggles are meaningless! Everything is brief. And all our struggles and passions? They signify nothing.

The images comes from Orson Welles’ 1948 crazed and twisted film version of the Scottish play. It’s worth a view.