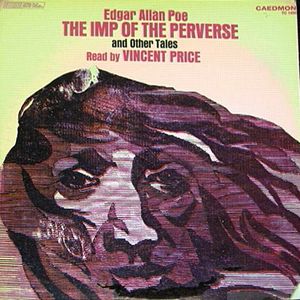 Have any of you ever resisted an sudden urge to veer your car into the opposing lane? Or veer it over the concrete abutment to sail from a high bridge to certain death at the bottom of a gorge? Edgar A. Poe felt these urges, and wrote about them in his essay:

We stand upon the brink of a precipice. We peer into the abyss—we grow sick and dizzy. Our first impulse is to shrink from the danger. Unaccountably we remain. By slow degrees our sickness and dizziness and horror become merged in a cloud of unnamable feeling. By gradations, still more imperceptible, this cloud assumes shape, as did the vapor from the bottle out of which arose the genius in the Arabian Nights. But out of this our cloud upon the precipice’s edge, there grows into palpability, a shape, far more terrible than any genius or any demon of a tale, and yet it is but a thought, although a fearful one, and one which chills the very marrow of our bones with the fierceness of the delight of its horror. It is merely the idea of what would be our sensations during the sweeping precipitancy of a fall from such a height. And this fall—this rushing annihilation—for the very reason that it involves that one most ghastly and loathsome of all the most ghastly and loathsome images of death and suffering which have ever presented themselves to our imagination—for this very cause do we now the most vividly desire it. And because our reason violently deters us from the brink, therefore do we the most impetuously approach it. There is no passion in nature so demoniacally impatient, as that of him who, shuddering upon the edge of a precipice, thus meditates a Plunge.

However, it’s not an essay. As Poe did in several other faked factual accounts–‘The Premature Burial’ the most famous example–his essay about the impulse to act against one’s own best self interest turns into a short story. In this one, the narrator’s a murderer driven, years after his crime, into sudden confession.

The murderers in ‘The Tell-Tale Heart’ and ‘The Black Cat’ succumb to the same urge. And perhaps Poe himself did this throughout his tragic life, a life full of grave mistakes, sudden turnabouts and personal acts of stupidity committed at the worst possible times. Despite this flawed behavior, Poe’s exploration of this urge forecasts the Freudian psychology of the subconscious and repression. Indeed, a mad genius.

The image comes from the cover of an old LP of Vincent Price reading Poe stories, including ‘Imp of the Perverse.’