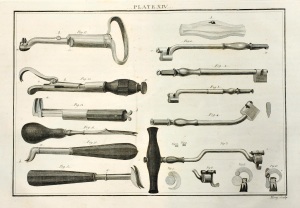 Today’s quote comes from a little known Poe yarn, “Berenice,” but in Poe circles it’s infamous for its excessive violence, brutality and horror:

His looks were wild with terror, and he spoke to me in a voice tremulous, husky, and very low. What said he?—some broken sentences I heard. He told of a wild cry disturbing the silence of the night—of the gathering together of the household—of a search in the direction of the sound; and then his tones grew thrillingly distinct as he whispered me of a violated grave—of a disfigured body enshrouded, yet still breathing—still palpitating—still alive!

He pointed to garments;—they were muddy and clotted with gore. I spoke not, and he took me gently by the hand: it was indented with the impress of human nails. He directed my attention to some object against the wall. I looked at it for some minutes: it was a spade. With a shriek I bounded to the table, and grasped the box that lay upon it. But I could not force it open; and in my tremor, it slipped from my hands, and fell heavily, and burst into pieces; and from it, with a rattling sound, there rolled out some instruments of dental surgery, intermingled with thirty-two small, white and ivory-looking substances that were scattered to and fro about the floor.

Yes, the narrator, Egaeus, is completely out of his mind, who suffers from catatonic episodes and epileptic seizures. He falls in love with his cousin, Berenice, who subsequently seems to die from some strange malady. As the story end, Egeaus’ servant informs Egaeus that in one of his catatonic episodes, he exhumed her grave and–using a set of barbaric 19th century dental instruments–tore out her teeth, teeth which he had become obsessed with. Of course–as is common in Poe stories–Berenice was unwittingly buried alive and is now screaming from her grave in terror and toothless agony.

In this little gem of a story we can enjoy some reoccurring themes of Poe’s fiction and poetry: madness, incest, the death of a beautiful woman (or, in this case, a seeming death), episodes of shocking violence and premature burial.

Readers complained to the editor of Southern Literary Messenger about the story’s violence, but Poe was unrepentant.

The image is a set of late 18th to early 19th century dental instruments, likely the kind used to dig out Berenice’s teeth. No, the story makes no mention of anesthesia.