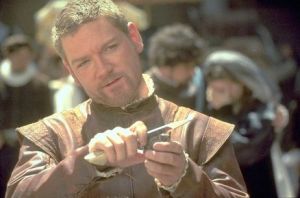 Our modern predilection in popular fiction and film for the anti-hero has its origins back in Elizabethan times. Christopher Marlowe’s The Jew of Malta reveled in villains wreaking havoc on the stage. But it was William Shakespeare who first fleshed out the villainous heart and made it real and visceral. So real and so close to the bone that he gave his greatest villain soliloquys with which to pour out his black soul. I give you Iago:

And what’s he then that says I play the villain,
When this advice is free I give, and honest,
Probal to thinking, and indeed the course
To win the Moor again? For ’tis most easy
Th’ inclining Desdemona to subdue
In any honest suit; she’s framed as fruitful
As the free elements. And then for her
To win the Moor–were’t to renounce his baptism,
All seals and symbols of redeemed sin–
His soul is so enfettered to her love,
That she may make, unmake, do what she list,
Even as her appetite shall play the god
With his weak function. How am I then a villain
To counsel Cassio to this parallel course,
Directly to his good? Divinity of hell!
When devils will the blackest sins put on,
They do suggest at first with heavenly shows,
As I do now. For whiles this honest fool
Plies Desdemona to repair his fortune,
And she for him pleads strongly to the Moor,
I’ll pour this pestilence into his ear:
That she repeals him for her body’s lust;
And by how much she strives to do him good,
She shall undo her credit with the Moor.
So will I turn her virtue into pitch,
And out of her own goodness make the net
That shall enmesh them all.

Here Iago is boasting about how clever he is. He asks if he really can be the villain if all he’s doing is giving innocent advice to Cassio and Othello. Of course, these are lies he’s planting in their heads, lies that will lead to disastrous and murderous action. Villains love to boast–and this great boast here has been borrowed again and again in popular entertainment up to this very day. Think of it: a Bond villain always boasts of how he’s going to destroy the world, and all of us love to hear the likes of Hannibal Lector lecture us.

There are some great lines in this speech, including my favorite, ‘Divinity of hell! When devils will the blackest sins put on, they do suggest at first with heavenly shows.’

The image is of Kenneth Branagh as the vengeful Iago in the 1995 film version of Othello. The original Shakespeare play is heavily edited for the film, but the language itself remains intact, and contains great performances all around. Watch it or stream it for a delicious treat.