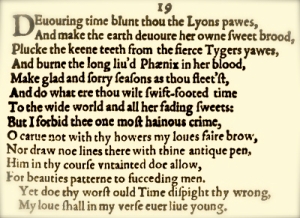 As this old year meanders to a close, I thought it appropriate to share one of Shakespeare’s  ‘Time’ sonnets.  In this one, The Bard treats Time like a character, whom the Poet addresses directly with a series of vivid metaphors.  These images describe how Time ultimately destroys everything, no matter how powerful or sublime.

And make the earth devour her own sweet brood;

Pluck the keen teeth from the fierce tiger’s jaws,

And burn the long-liv’d phoenix, in her blood;

Make glad and sorry seasons as thou fleet’st,

And do whate’er thou wilt, swift-footed Time,

To the wide world and all her fading sweets;

But I forbid thee one most heinous crime:

O! carve not with thy hours my love’s fair brow,

Nor draw no lines there with thine antique pen;

Him in thy course untainted do allow

For beauty’s pattern to succeeding men.

Yet, do thy worst old Time: despite thy wrong,

My love shall in my verse ever live young.

For me, this sonnet marks a turn in the Young Man sequence of verses.  The Poet has now given up on his earlier arguments: that the Young Man should procreate to preserve his own beauty.  Now the Poet employs something more powerful than nature’s gift to humans—the ability to reproduce.  Starting with the Sonnets in the late teens, the Poet summons power the Art, specifically Poetry.  Shakespeare’s poem itself shall preserve the Young Man’s beauty for eternity, thereby defeating Time’s ‘worst’.

Could Shakespeare have know how right he was?  Could he have dreamt that over 400 years later, his beloved would still live on in the lines of these immortal words?  Possibly not.  Scholarly evidence suggests fairly convincingly that the Sonnets were published without Shakespeare’s permission.  He likely intended for all of 154 of these verses—to the Young Man and the Dark Lady alike—to never see the public eye.  They were risqué, dangerous in the Elizabethan world of religious morality and homophobia.   Thankfully, today, at the close of 2014, they are regarded as the epitome of the poetic form in the English Language.  They have defeated Time’s ‘most heinous crime.’

The image is from Thomas Thorpe’s unauthorized publication of ‘SHAKES-SPEARES SONNETS’ from 1609.