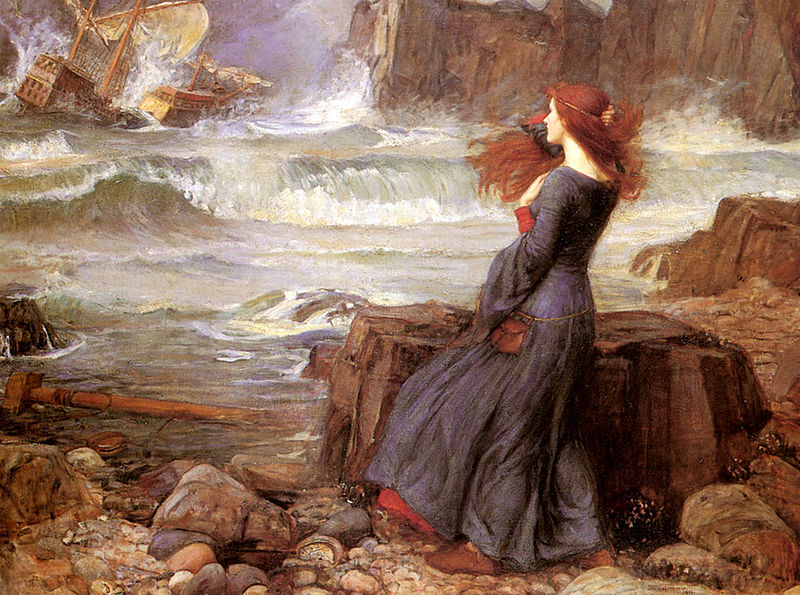 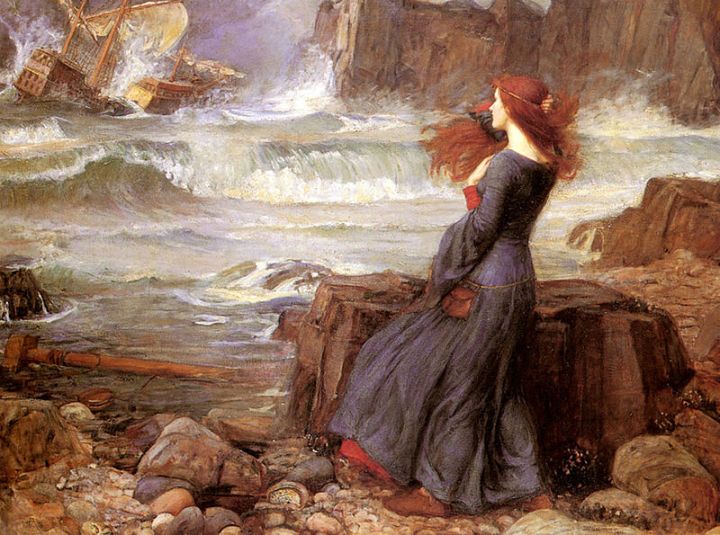 Today my daily walk took me through some very blustery Spring air: the clouds and trees moved and tossed and moaned and whistled with unsettled ease. It seemed a tempest might brew. That brings me to today’s brief notes: Shakespeare’s The Tempest. The opening scene of this play shows a tempest shipwrecking a vessel. In the second scene we meet the author of that tempest, the mighty Sorcerer Prospero. But how mighty is he? His own daughter takes him to task:

If by your art, my dearest father, you have

Put the wild waters in this roar, allay them.

The sky, it seems, would pour down stinking pitch,

But that the sea, mounting to th’ welkin’s cheek,

Dashes the fire out. Oh, I have suffered

With those that I saw suffer. A brave vessel

Who had, no doubt, some noble creature in her

Dashed all to pieces. Oh, the cry did knock

Against my very heart! Poor souls, they perished.

Had I been any god of power, I would

Have sunk the sea within the earth or ere

It should the good ship so have swallowed and

The fraughting souls within her.

I have done nothing but in care of thee,

Of thee, my dear one—thee my daughter, who

Art ignorant of what thou art, naught knowing

Of whence I am, nor that I am more better

Than Prospero, master of a full poor cell

And thy no greater father.

Did never meddle with my thoughts.

—The Tempest, Act I Scene ii

May I highlight what I think is the most the lovely part of Miranda’s opening speech?

Put the wild waters in this roar, allay them.

The sky, it seems, would pour down stinking pitch,

But that the sea, mounting to th’ welkin’s [heaven’s] cheek,

Dashes the fire out.

Anyhow, for years I wondered why I keep coming back to this opening scene between the sorcerer Prospero and his daughter Miranda and I think I’ve figured it out.

Miranda loves her father, but nonetheless knows he created the storm and that it has apparently sunk a ship, killing the men on board. He responds with vague promises that no harm was done and that he’s only doing it for her, and that she doesn’t know everything. Sounds like lame excuses.

And yet Prospero, by play’s end, ascends to be one of Shakespeare’s greatest protagonists. And that’s why I like this beginning: It’s a great lesson for writers. The best writers set up their heroes for failure: heroes who are flawed and seem incapable of redemption.

Shakespeare introduces one of his greatest characters by having him taken down by the very sympathetic Miranda, she motivated by the most noble of principles: she cares for her fellow men–even strangers. Shakespeare doubles down on this technique later in the scene when he introduces Ariel and Caliban, Prospero’s two magical servants. They’re really slaves. By scene’s end we see Prospero treating Caliban with contempt, and basically admitting to Ariel that he’s broken his promises to the creature.

Back to Miranda. She’s innocent and naïve, yet brave, not afraid to disagree with her father. And she’s honest–when she sees Ferdinand for the first time, she doesn’t hesitate to admit she loves him. But I guess what I really love about Miranda is at play’s end, Shakespeare chooses her to utter these immortal lines:

How many goodly creatures are there here!

That has such people in’t!

—The Tempest, Act V Scene i

The Tempest is arguably the capstone of Shakespeare’s works, coming as does near the end of his career. And despite all the travails of the harsh Elizabethan world, and all the tragedies of Shakespeare’s own life, he prefers to release, on the lips of a Miranda, a message of hope and belief in the nature of mankind.

It’s been a beautiful summer here in Southern Wisconsin. Such delightful, gentle days bring to mind a snippet of verse from The Tempest, where the forces of Nature, including Prospero’s magical island, almost act as one of the characters. Caliban and Ariel, both preternatural creatures, are manifestations of that island, and in the opening of the final act, Ariel sings a song:

Where the bee sucks, there suck I:

In a cowslip’s bell I lie;

There I couch when owls do cry.

On the bat’s back I do fly

Merrily, merrily shall I live now

Under the blossom that hangs on the bough.

–The Tempest, Act V, Scene i

And why shouldn’t Ariel sing? For it’s in this scene that Prospero promises Ariel her freedom after decades of servitude the Prospero the Sorcerer.

The image comes from Southern Wisconsin’s very own American Players Theatre, with Susan Shunk as Ariel and Kenneth Albers as Propsero from the troupe’s 2011 production of The Tempest. 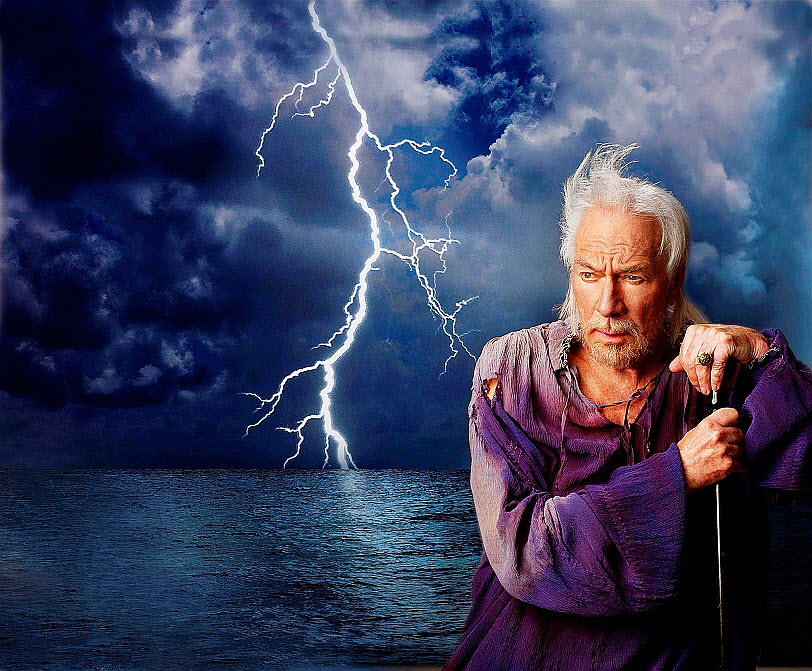 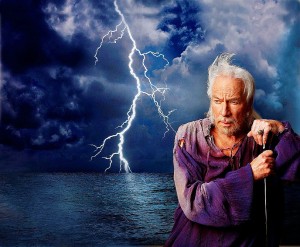 Some believe this is the greatest Shakespearean speech ever. Which, if true, would make it one of the great speeches in English literature:

Ye elves of hills, brooks, standing lakes and groves,
And ye that on the sands with printless foot
Do chase the ebbing Neptune and do fly him
When he comes back; you demi-puppets that
By moonshine do the green sour ringlets make,
Whereof the ewe not bites, and you whose pastime
Is to make midnight mushrooms, that rejoice
To hear the solemn curfew; by whose aid,
Weak masters though ye be, I have bedimm’d
The noontide sun, call’d forth the mutinous winds,
And ‘twixt the green sea and the azured vault
Set roaring war: to the dread rattling thunder
Have I given fire and rifted Jove’s stout oak
With his own bolt; the strong-based promontory
Have I made shake and by the spurs pluck’d up
The pine and cedar: graves at my command
Have waked their sleepers, oped, and let ’em forth
By my so potent art. But this rough magic
I here abjure, and, when I have required
Some heavenly music, which even now I do,
To work mine end upon their senses that
This airy charm is for, I’ll break my staff,
Bury it certain fathoms in the earth,
And deeper than did ever plummet sound
I’ll drown my book.

—The Tempest, Act V, Scene i

This is the last great speech of the last play Shakespeare wrote entirely himself.  And it’s not hard to see Shakespeare drawing a connection between the aging magician, Prospero, and himself, the aging playwright. For Prospero, at play’s end, is at the height of his magical powers; and arguably, The Tempest saw the playwright also at the height of his powers.   Both the magician and playwright choose to ‘break my staff…’ A pun on his own name? Finally to ‘drown my book.’ And before these final pronouncements, the soliloquy registers a train of triumphs and accomplishments. Each of the lines of this speech easily harkens back to any innumerable scenes or characters in his thirty-some plays.

Like many of greatest artists and athletes of today’s world, the Bard chose to go out on top.

The image comes from Christopher Plummer as Prospero in a 2010 version of Shakespeare’s play.

Our revels now are ended. These our actors,

As I foretold you, were all spirits and

Are melted into air, into thin air:

The cloud-capp’d towers, the gorgeous palaces,

The solemn temples, the great globe itself,

Yea, all which it inherit, shall dissolve

Leave not a rack behind. We are such stuff

As dreams are made on, and our little life

Is rounded with a sleep.

From The Tempest, Act 4 Scene 1 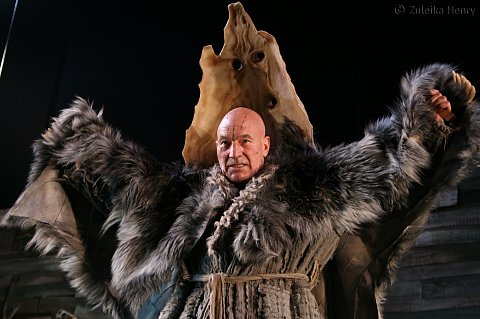 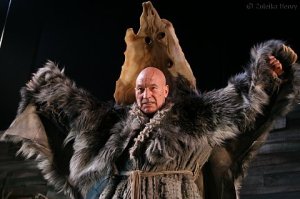 Today, I’d like to share a supremely beautiful speech from Shakespeare’s The Tempest. It almost seems as if Will Shakespeare himself is speaking through Prospero, ruminating on the power of his magic (Prospero the magician; Shakespeare the playwright) and thereby forgetting the mundane concerns of ordinary life:

…Our revels now are ended. These our actors,
As I foretold you, were all spirits and
Are melted into air, into thin air:
And, like the baseless fabric of this vision,
The cloud-capp’d towers, the gorgeous palaces,
The solemn temples, the great globe itself,
Ye all which it inherit, shall dissolve
And, like this insubstantial pageant faded,
Leave not a rack behind. We are such stuff
As dreams are made on, and our little life
Is rounded with a sleep. Sir, I am vex’d;
Bear with my weakness; my, brain is troubled:
Be not disturb’d with my infirmity:
If you be pleased, retire into my cell
And there repose: a turn or two I’ll walk,
To still my beating mind.

The Tempest, we’re pretty certain, is the last play Shakespeare wrote entirely himself. After this play, he went into semi-retirement, only to do a few collaborations with his protégé, John Fletcher. And so in many ways this play seems to be a farewell to the magic of playwrights and theatre.

The insubstantial pageant fades, the great globe (a references to The Globe Theatre) shall dissolve.

Of course, it’s these very words–this very play and the whole rest of Shakespeare’s canon–that outlived all of Mr. Shakespeare’s daily concerns, and will outlive all of ours. That’s the magic of Art.

The image is of Patrick Stewart as Prospero from the Royal Shakespeare Company’s 2006 production of The Tempest.