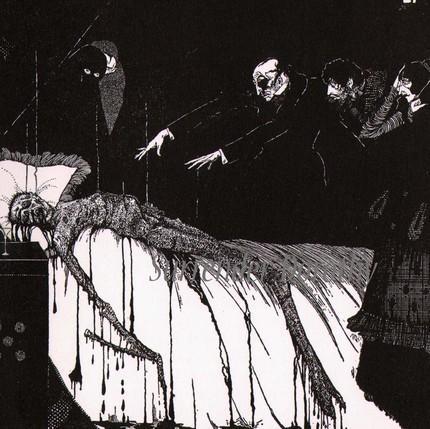 The indefinable boundary between life and death fascinated Poe. In one of his more bizarre and grotesque yarns, Poe explores the power of hypnotism, and whether such a thing as an induced trance might have the power to stave off death. A morally questionable mesmerizer attempts it on a tuberculosis victim, only to yank the voice of Death itself from the lips of the fresh cadaver:

I now feel that I have reached a point of this narrative at which every reader will be startled into positive disbelief. It is my business, however, simply to proceed.

There was no longer the faintest sign of vitality in M. Valdemar; and concluding him to be dead, we were consigning him to the charge of the nurses, when a strong vibratory motion was observable in the tongue. This continued for perhaps a minute. At the expiration of this period, there issued from the distended and motionless jaws a voice—such as it would be madness in me to attempt describing. There are, indeed, two or three epithets which might be considered as applicable to it in part; I might say, for example, that the sound was harsh, and broken and hollow; but the hideous whole is indescribable, for the simple reason that no similar sounds have ever jarred upon the ear of humanity.

The narrator’s attempt to put the dying Mr. Valdemar in a state of suspended animation ends in a spectacularly gruesome denouement. I won’t spoil it for you–the story’s short, you should go read it. But remember this when you do: We know it’s fiction, but when Poe published this in 1845, it wasn’t labeled as fiction; many readers believed it to be a scientific report. Poe fills the story with a plethora of succinct details; the lurid accumulation of leaking bodily fluids, the ghastly anatomical descriptions and abrupt pronouncements of unpleasant sights and smells. These convinced many people that this little horror show actually happened.

What many people perhaps didn’t think about is the Poe’s own wife, Virginia, died of tuberculosis. Perhaps there’s a moral lesson buried here, as it were, beneath all the grotesqueries.

The image is Harry Clarke’s illustration of the story for a 1919 edition of Poe’s works.